From Stack of Boards to Boombox (with Up2Stream Amp 2.1)

Hi all,
As probably most of you, I had to find me a distraction during the last “do not leave the house” winter. Since I just setup my small hobbyist electronics lab and also was eager to learn more about woodworking, I did what most average guys would do in this situation - build a boombox

. I decided to use the Dinas Boombox design of 123Toid as a starting point and to adjust it to my needs. The main deviation from the Dinas design was to not use a port but a passive radiator (8.5").

Everything started with a stack of boards, a couple of fullrange speakers from Dayton Audio (4") and a subwoofer from TangBand (6"), and - of course - the Arylic Up2Stream Amp 2.1 for the “inner values”. 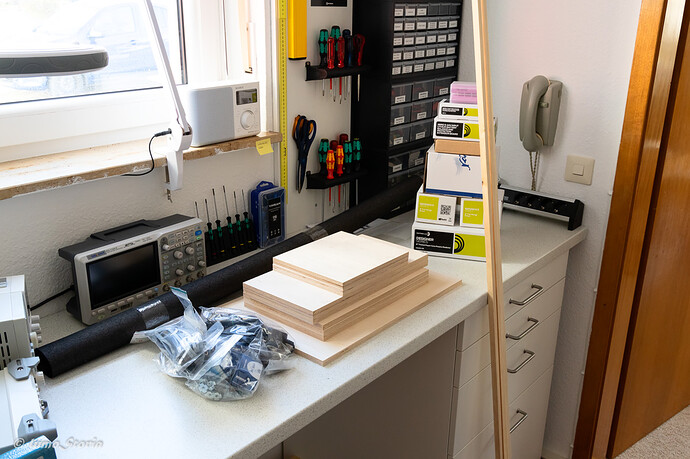 The woodworking part was not that complicated - glueing the sides together and covering them with brown structured Tolex, routing holes in front and back for speakers, radiator, and control panel, veneering front and back in Mahogany, and adding a handle, some rubber feet, and cabinet corners to give it a vintage “guitar amp”-ish look. Afterwards, the shell looked like this: 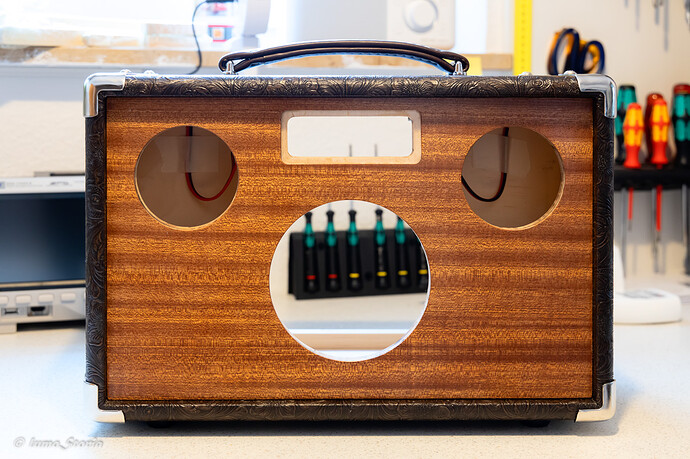 Then, I had the “glorious” idea to unsolder the volume encoder from the Arylic Up2Stream board (to use it in my own control panel) - and failed miserably. 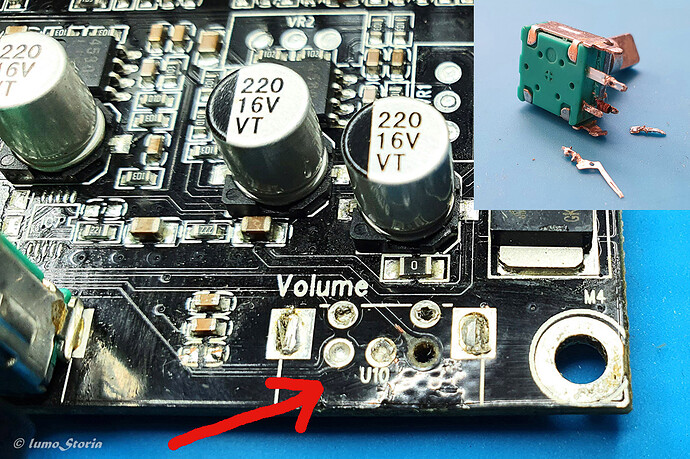 Only afterwards I learned that the board has a very handy 9pin breakout connector that allows, beside other things, to connect an external volume control. At least, if you can teach your volume control to provide a voltage impulse of intensity A for “volume down” and intensity B for “volume up”. Unfortunately, none of the volume encoders I know will do this, instead they just return a noisy 2-bit Gray code and let you figure out what they want to tell you. To solve this problem, I used a small microcontroller (ATtiny 85) to decipher the encoder response and convert it to the voltage impulses requested by the Arylic board. I put the encoder (a new one since I broke the original one during my desoldering failure), the microcontroller, and some more electronic components on a small piece of PCB, connected it to the Arylic board and - it worked 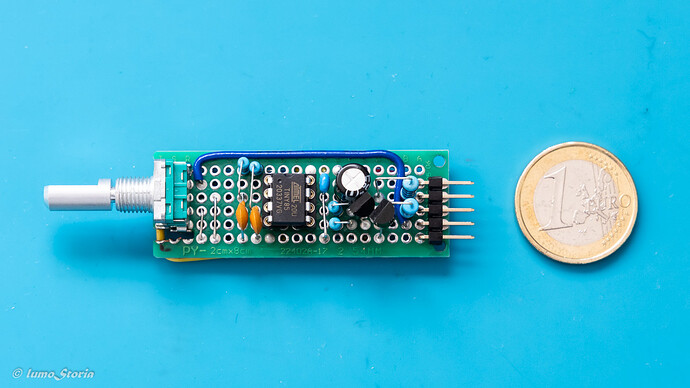 This success encouraged me to design a small control panel for the volume control, the mode switch, the mode LEDs (Line In, USB, WiFi, Bluetooth), the power/WPS switch, the Play/Pause and Next buttons, and the infrared sensor. All of these functionalities (and more) are provided by the 9pin breakout connector mentioned. One tip if you also want to use this connector: The Arylic manual just says “PH2.0-9P” but the correct name of the needed female connector is “JST XH 9pin” (pitch 2.54mm). Since crimping these small connectors can be a nightmare I suggest to buy the connector with pre-installed wires.

Here’s the control panel (goes to the front of the boombox), the audio in/out panel, and the power supply panel (later two go to the back). I didn’t find a better (while still affordable) solution than using a two-layer approach. The inner layer is hand-made from 2mm aluminium, the outer layer is laser-cut from 1.5mm acrylic. Unfortunately, the acrylic was not stable enough to use it as only layer. 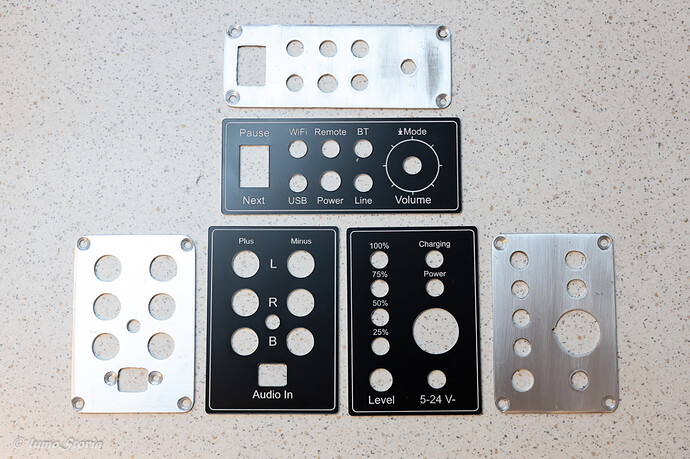 Now, everything was ready for final assembly. Here’s a picture of the interior of the boombox (with speakers not mounted yet): 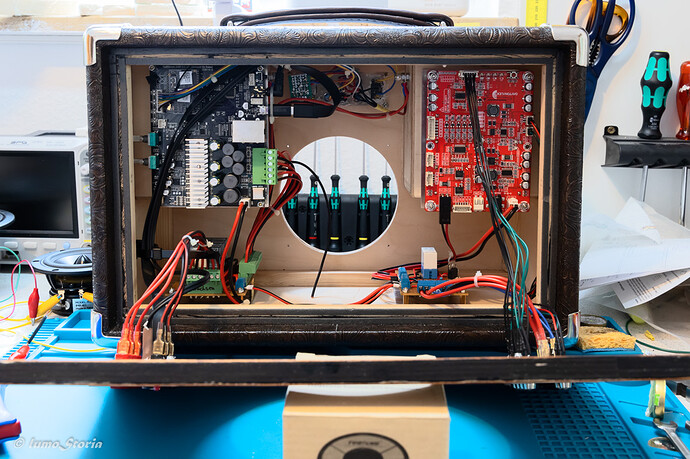 After mounting the speakers and screwing on the back, the boombox was finished. Voila 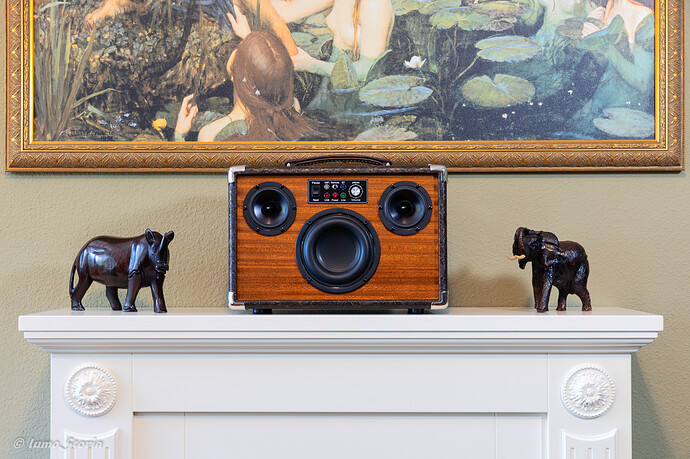 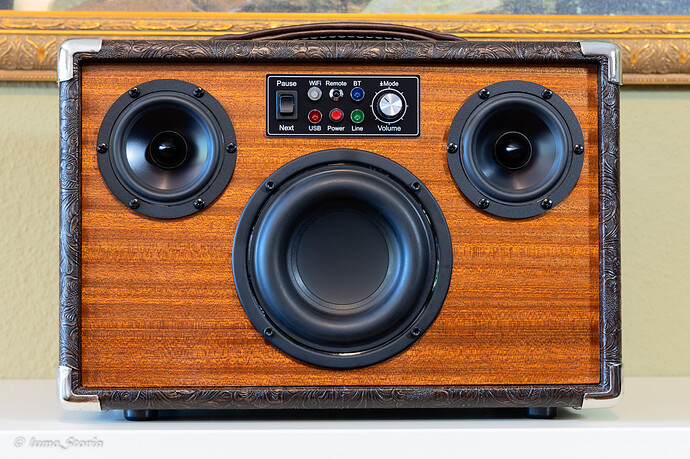 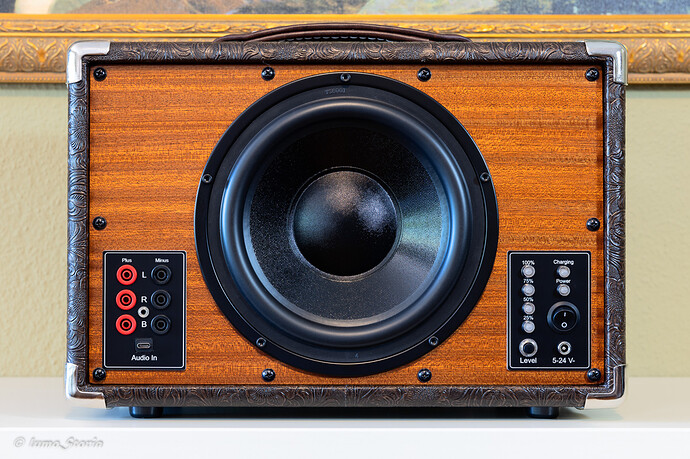 Despite some setbacks (for which I take the blame), it was a pleasure to build my boombox powered by the Arylic Up2Stream Amp 2.1 board. What sets it appart from other amplifier boards I know (beside the ability to adjust its acoustic and control behavior using the ACP Workbench) is the breakout connector that allows you to design your own control panel freely, just based on the space constraints and aesthetic rules, not on the form factor and control layout of the board itself. Kudos for this.

Finally, if I may also express some criticism towards Arylic: For a board that powerful, the manual is definitely to short, leaving out certain aspects especially important for DIY makers. For example, it would be nice to state the correct technical names of all connectors on the board so that you can find the necessary counterparts without trial-and-error.

Hope this presentation of my DIY boombox was of any use to you.

Nice Boombox you have created！Looks very nice.
I also use an external volume encoder, but I got the one Arylic sells which can directly connect to my AMP 2.0 with cable, works pretty good too.

I know that Arylic sells a button board that includes Volume-Up and -Down buttons. However, in the front of my boombox, I only had space for a 3x10cm cutout to squeeze in all controls. In comparison, the Arylic button board looks gigantic. I also prefer a Potentiometer-style control over buttons.

Of course, the easiest way is still to desolder the volume control from the Arylic board and just connect it via wires. At least, if you are a desoldering guru (that I’m definitely not, as can be seen from the pictures). Wouldn’t try it again without a professional desoldering gun.

Very nice work there and as I mentioned in my post, unlike me, I can tell you really know what you’re doing.
Well done.