Where is the best place to find the list of UART commands ?

Thanks very much for posting the links. I have only briefly tested but great work. It will really make it very quick and easy to Integrate Voice Control for Key Commands

I now have to think how to structure and use it. Will give feedback when I’ve decided what to do and implemented. Clearly knowing your way around Home Assistant is essential

I am lucky that I have knowledge and use it for many other things.

Today I moved onto scripts

OK so the 4 commands I tried in “linkplay.command” do not work. No Notification or Log Error.

Anything obvious spring to mind ?

Many Thanks in advance, Kevin

P.S. Just read your post again. Will they work in Automation and NOT Script ?

I just tested the scripts below and they work perfectly for me, by triggering them from Configuration > Scripts:

It also seems you didn’t read the manual about that you also can use the notify parameter to avoid the instant notification at each script run. This is optional though, shouldn’t affect scripts runnability.

The key was tp present the scripts as you showed in your post: 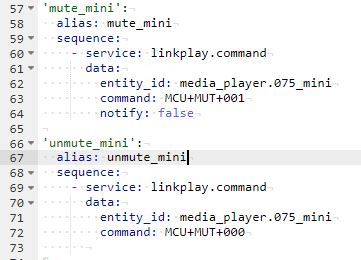 I did read the manual

I thought having the notify reply was a very good idea when testing so I left it like that.

Many thanks for you help and support, Kevin

P.S. I found your documentation/manual well written and easy to follow

Guys, is there a way to reboot the device from HA? 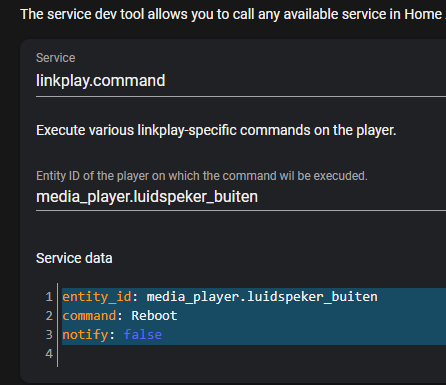 but get “unknown command” back

how can we initiate a reboot?

Reboot functionality seems to be removed from the recent firmwares. It was not a real reboot anyway…

Oh, that’s too bad, i had to reboot my device this morning, for some reason it didn’t popup anymore as available device in Spotify…

While other internet radio still worked and app too…
After reboot, it pop-up again in spotify

I am thinking of doing something this for each Arylic Device that I have. I already have spare relay contacts in my house so it is straightforward for me

For a reliable “power cycle off/on” you could use a relay module [RelayModule] There are plenty of Interface Choices too. Wifi RF 433 MHz Hard wired to RPI, Arduino, etc. etc.

I have some problem to understand the instructions for common sources:-

Is the intention to have the "!include … " instruction in “configuration.yaml” or somewhere else ?

Many thanks in advance, Kevin

I am thinking of doing something this for each Arylic Device that I have. I already have spare relay contacts in my house so it is straightforward for me

offcourse, i can also use a smart wifi plug, but then again, extra hardware is needed
it should work with the API, the command is supported, but it doesnt work

I have some problem to understand

Please, why do you put so many screenshots in the forum? You should instead copy the text and paste it here, then select it and apply the preformartted </> code function. Not only it would look nicer, it would also save a lot of resources for everybody (less server capacity, less bandwidth for users with text only instead of pictures containing text). And it would allow others too to copy from the text.

You should instead copy the text and paste it here, then select it and apply the preformartted </> code function

Hopefully @zpl1025 Frank from Arylic can tell us if they are planning to reintroduce “reboot” at some stage.

Since you can send the passthrough commands in HA, you could try this one: MCU+PAS+RAKOIT:SYS:REBOOT&

Frank @zpl1025 What part of the system does this reboot ?

Should be the base board, I need to search in the codes for details anyway

@robi This was a game changer. Great Work 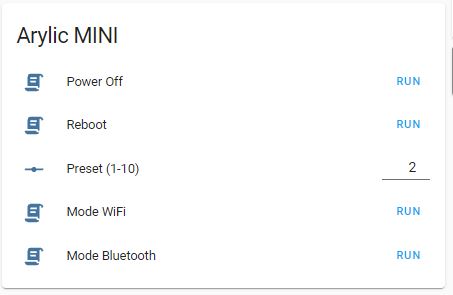 This is achieved with a mixture of “Scripts” e.g.

The Preset is achieved with a input_number Object:

And on change of PRESET value will run an “automation”:

Thanks for your software @robi works a treat