I designed my own PCB with ADC-Keys to control the media playback, but unfortuantely none of the buttons are working properly.

Based on the schematic in the AMP2.1 User manual, I made my own schematic with some of the ADC Keys (see picture below). Since I do not have a 27K resistor I used a 22k+5.1k resistor in series and instead of a 3.6k resistor I used a 3.3k+0.33k resistor in series, thinking these values should be close enough for such a voltage divider.
But unfortunately none of the buttons are working as they should be. Some aren’t detected at all while some are being detected as something else. 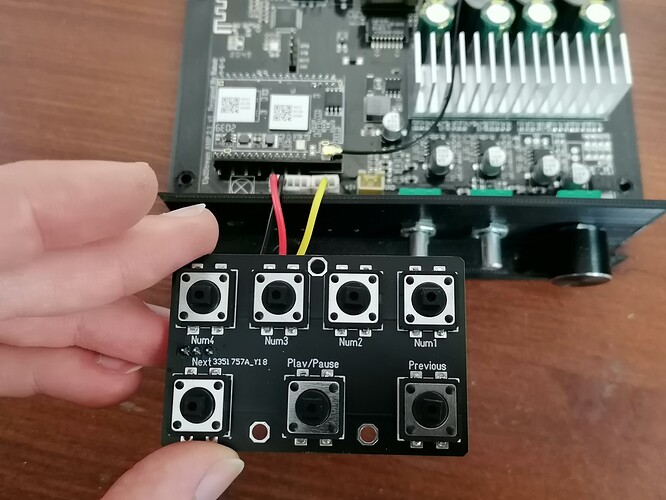 Did I hook up something the wrong way or is the schematic in the manual outdated / incorrect or what else could be the problem here?

Hi!
I tried using buttons on Up2Stream HD. Perhaps the resistor R5 (10K) is already on the board? In my case, I just connected the resistors through the buttons to GND.

Thank you for the response! After reading the other thread it seemed promising, that I just need to remove (or basically short) the 10k resistor on my board. Unfortunately this did not fix the problem for me. After doing that, none of the buttons are working anymore. Before I could here a beep on every button press, now I don’t here any beeps anymore and also none of the buttons are doing anything now.

Do not short but remove!

When I just remove the 10k resistor and don’t bridge the contact pads, the 3.3V Pin would not be connected anymore, since it is in series with this resistor.

This resistor is already on the board.
It has also been discussed here

Strange. Then there must be another problem.

When I remove my 10k resistor and bridge the solder pads of this resistor, none of the buttons are working anymore. Without my 10k resistor, I measure 3.285V on the ADC Key all the time. Both when I press a button or when I don’t press any button.

When I add my 10k resistor back, the voltage on the ADC key varies depending on which buttons I press. Just the behaviour you would expect from a voltage divider.

I also tried to find the 10k resistor on the amplifier board and verify the resistance, but I couldn’t find a 10k resistor which is hooked up to the 3.3V pin so far. It’s quite difficult to follow the traces on the PCB to find it.

Thank you, with this example I finally got it

Now it is working fine.

Glad you already found the Solution.
Your PCB looks pretty nice!
Where did you order this and how much did it cost?
I am thinking of getting my own, just with JST connectors instead of the Buttons soldered on directly.

congratulations on this solution, i had similar problems… see here and the measurement results!:
https://forum.arylic.com/t/button-board-vs-touch-board-questions/1819 greetings joerg