Here is a project I completed recently that this forum may be interested in. It is based on a 1998 Cambridge Audio A5 hifi stereo amplifier. I’m a hobby electronics enthusiast who repairs, refurbishes, upgrades and tests mainly vintage amplifiers, tuners and receivers. 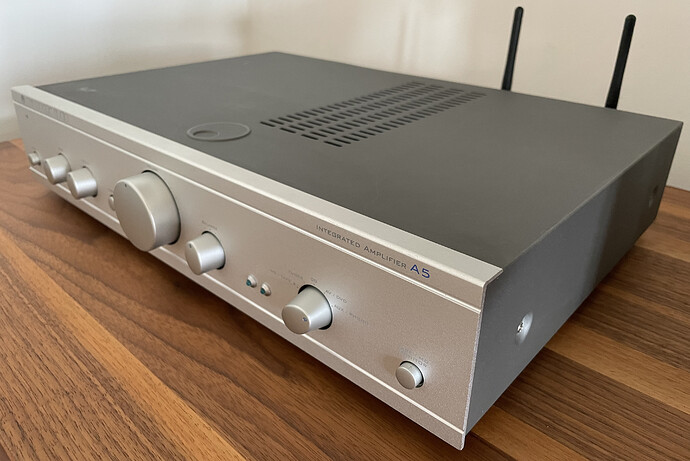 I bought the CA A5 ‘for spares or repair’ from eBay and then set about repairing and recapping it with top quality hifi audio grade Nichicon electrolytics. There were numerous faults associated with the pre-amp stage voltage regulators so they were replaced. The amplifier is the Mk1 variant that makes use of discrete transistors in the power amp stage rather than the later Mk 2 that uses IC modules instead. 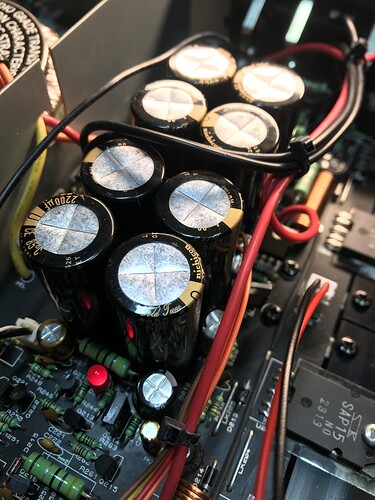 The amplifier has a slot with connectivity for a OEM phono stage to be optionally fitted so I decided to make use of this space by designing a daughter board that would interface to the Acrylic Up2stream Mini V3 module. 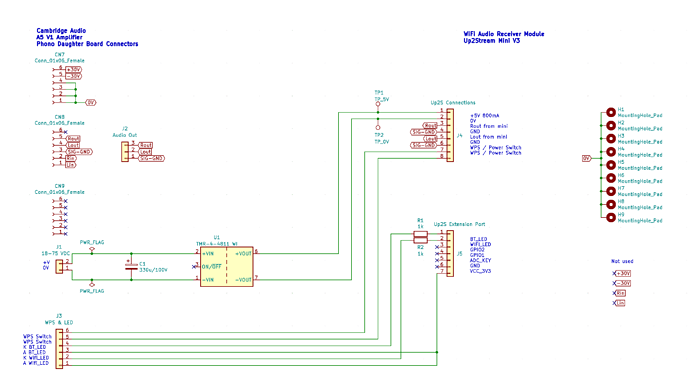 It’s a simple circuit that:

The Up2stream Mini V3 doesn’t have header pins for all, so if you look at the photo carefully you can see I removed then wired directly the power connector and push button. 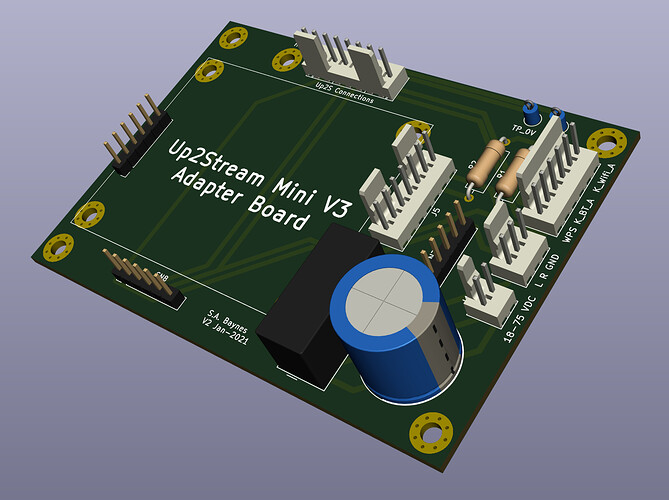 The circuit and PCB was designed to be general purpose so I could use it for other similar projects.

Here is the Up2stream Mini V3 fitted for initial testing. This picture was taken before I’d finished so the rear aerials and LEDs were not yet fitted. External bluetooth and wifi aerials are necessary as, unlike some vintage equipment, the case is made of steel. 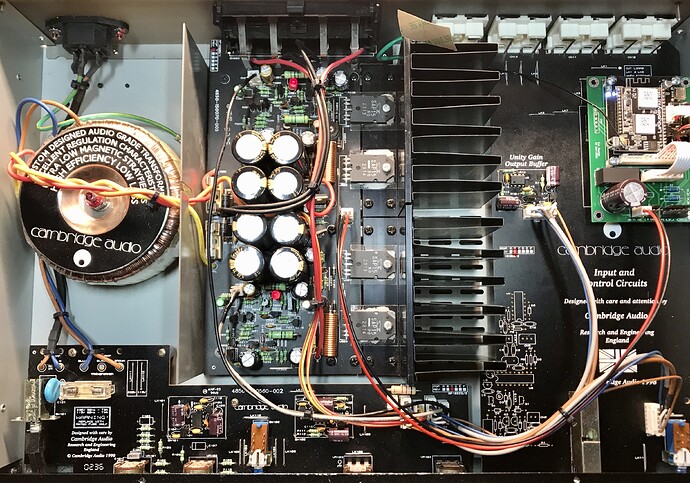 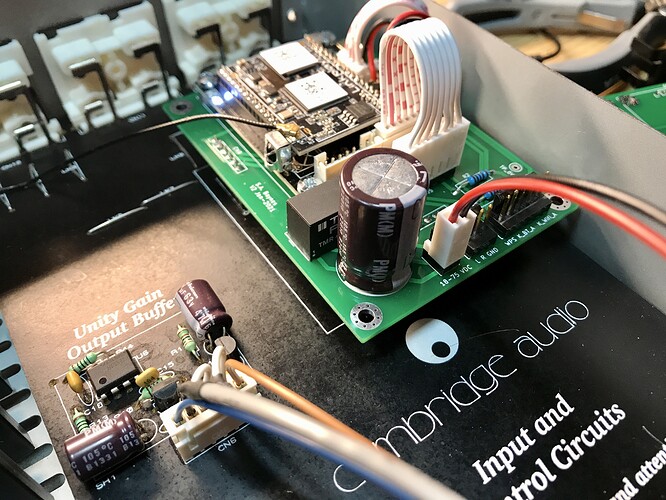 On the rear of the A5 amp I fitted the two aerials and a switch to reset the Up2stream Mini V3. Almost looks OEM.

And here is the front panel with two LEDs. With hind sight, I wish I’d only fitted a single LED for the wifi as it would look more professional. Hey ho.

As usual, I tested the amplifier frequency response, THD v.s. power output to make sure all within OEM specification. For this amplifier, I also tested the frequency response through the Up2stream Mini V3. The streamer is pan flat, but does introduce is a brickwall filter at 17kHz whereas the amplifier is nearly flat to 20kHz. The 0.74dB inaudible difference between left and right could be corrected with the Arylic software tools. 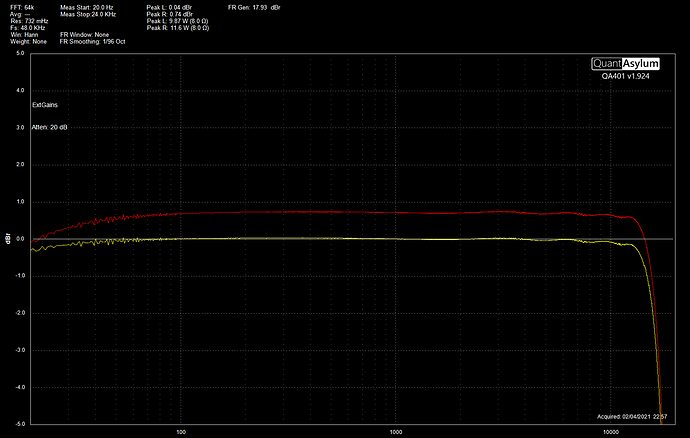 If you look this week, you will see this Cambridge Audio A5 amplifier advertised on eBay. It’ll be interesting to see what it fetches.

What do you think?

Pretty cool upgrade for the old amp, and this is exactly this little board targeted. And you should really consider the DAC board for better sound as the internal DAC is a bit normal for a hifi amp. The DAC board used the ES9023 chipset and will have better performance and hearing experience.

Thanks for presenting your interesting project

. I hope all the hard work pays off in the eBay auction

. You seem to be a gambler by setting a start price of only £0.99; I could not stand that pressure

Yes it will be interesting. In practice, if it gets more than £50 and goes to a good home I’ll be happy. For me it’s the journey rather than the end result that’s important. If I was retired and this was my only income then it might be a different story.

Thanks for your comment. I do have the higher performing DAC but decided on this project just to go with the standard one. I felt I was already going overboard and wouldn’t recover what it’s actually cost me by a sizeable margin. Anyway I’ve a few more projects in the pipeline so will try the better DAC soon.

This up cycling isn’t economically viable though - the streaming Cambridge Audio only achieved £115 on eBay over the weekend so all my work (parts and time) only added valued about £75. Won’t be giving up my day job anytime soon

Sorry to hear that. Despite you are not going to make a living out of it I am sure the satisfaction of making a unique piece of kit like this will help inspire you onto your next idea

alternately and selfishly keep all the kit for yourself

It achieved a just about acceptable £115, so a bargain for someone. Hopefully it’s gone to a good home.