I have outlined below and included here some images and details of a recent project to include a number of amplifiers, receivers and other devices, in order to provide whole home audio, both inside and outside.

The idea was to provide music, zoned for different areas but that could also be joined to create larger areas. In addition, I wanted to ensure other devices could be connected and thus their output streamed throughout the house and outside.

I had the luxury of starting from scratch, since the house was being built so specified speaker and cable locations before there was anywhere to put them. This meant I could fit CAT6 everywhere, along with running speaker cables to ceiling locations, outside and within walls where I knew I wanted devices.

This means most devices are connected via Ethernet, which will always be superior to WiFi. 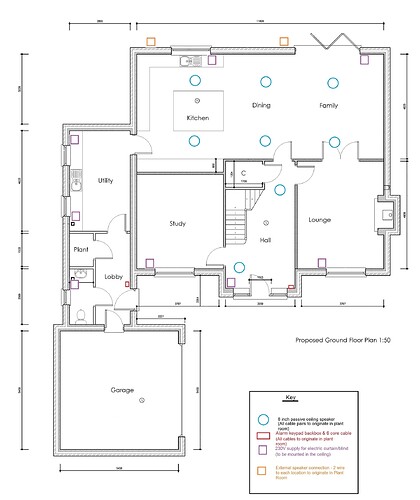 This just shows the ground floor, there are other speakers and receivers now located elsewhere, on the upper floors.

Basic assembly of the main elements to drive the speakers went well, since they are small and easy to work with. 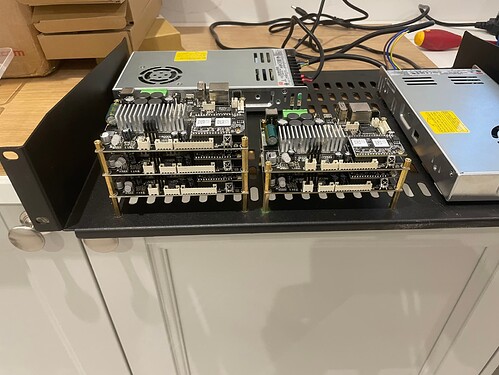 I do need to do some more work in the cabinet to tidy this up! 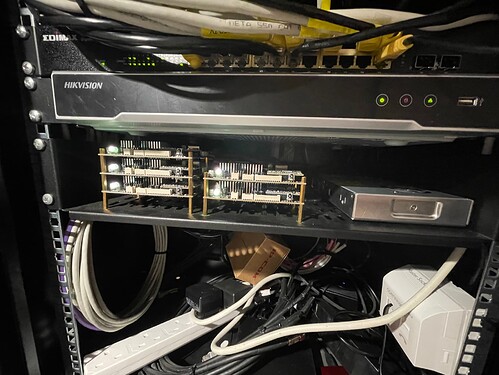 I also added a subwoofer to the ground floor, which makes a huge difference to the sound quality. Initially this was connected via Ethernet, but in fact it works perfectly well via WiFi. I was somewhat concerned regarding timing, but there is no appreciable lag. 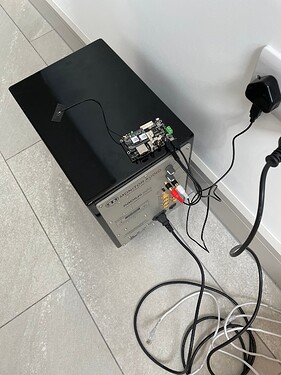 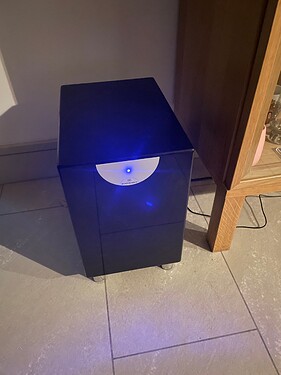 Presumably there is nothing that can be done, since this is simply the delay in the ADC of the Up2Stream Pro V3, then the network transmission to the next device and then the DAC in that device before I can hear the audio from the speakers. However, it is great fun to hear the piano being played on all the devices around the house and to use the Aux In on the piano (and thus the very high quality piano amplifier and speakers) play other music in the hallway. (Excuse the bare light bulbs, we have yet to fit shades and lamps everywhere!) 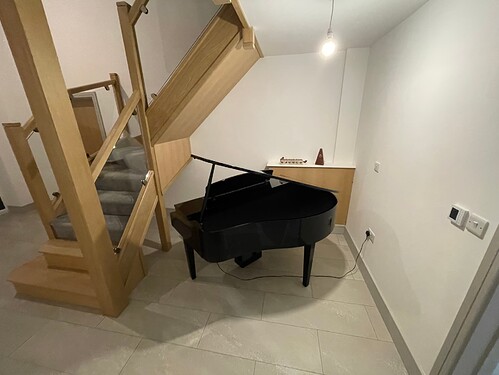 Outside, I have Bose Environmental 251 speakers connected to another amplifier. Bose tend to be coy about their speaker specification and I was a little concerned that they would not be be suitable, but in fact they sound incredibly good and are driven perfectly well by the Up2Stream V4 amplifier. 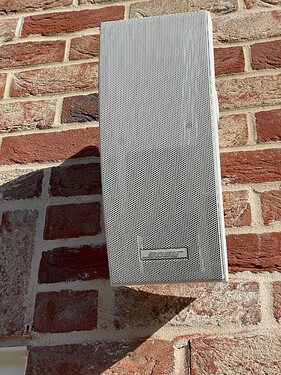 There is another Up2Stream Pro V3, also using a SPDIF Out Board connected to the TV, to provide audio via any connected speaker from the TV.

Finally, I am using an S50 Pro+ connected to the turntable, CD player and valve phono preamp to enable vinyl playback around the house, or to stream from local sources or Spotify to the living room speakers, via a PS Audio Stellar amplifier. 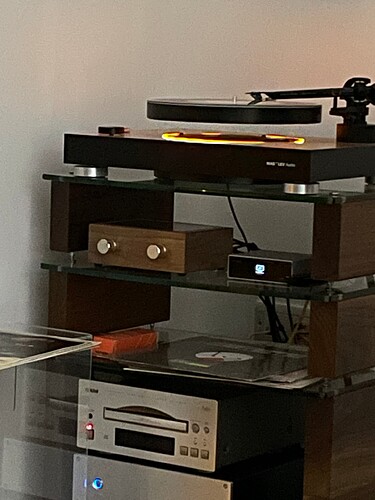 All in all I found the system easy to install, set up and easy to work with. Everyone I have communicated with at Arylic has been helpful and the products have arrived promptly and I have suffered no quality issues.