What type is the antenna connector of the WiFi antenna?

For my project I need to replace the standard WiFi-antenna that comes with the Up2Stream Mini v3. (To a different one than the Arylic alternatives) 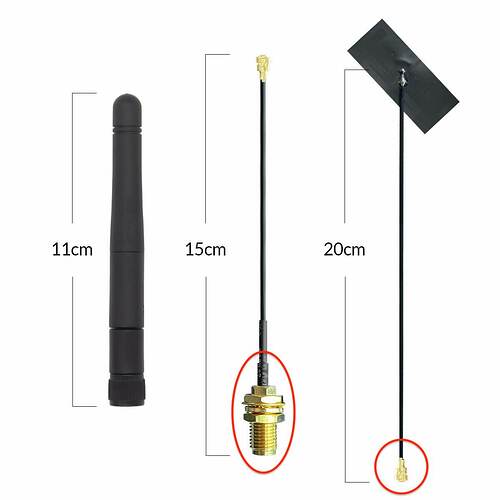 So who can help me out, what is the specific types of these connectors?

The two connectors are a mini I-PEX (u.FL) and a SMA coax connector (male or female).
The easiest is an antenna set with rod antenna and cable for Wifi. On the PCB is a mini I-PEX (= u.FL /IPX) coax connector and the rod antenna can be unscrewed from the gold plated SMA connector for chassis mounting. Many Wifi antennas are compliant if they meet the specifications of the Arylic Wifi module :

Thanks Temrotec, this is very helpful information.
One thing I’d like to check to be sure.

If I look at the Arylic WiFi antenna with the rod (so the item on the left and in the middle in the picture above), the connector on the antenna wire looks like a female RP-SMA.

So my question is; are these ‘SMA’ or ‘RP-SMA’ connectors?

The RP-SMA typing of the coax connectors is confusing because the chassis connector is called female, although it looks “male” with the central pin.

Practically speaking, it does not matter which type of SMA (or RP-SMA) connector you choose. Of course, the rod antenna must be able to be screwed onto the appropriate chassis connector (male/female) so both must be either SMA or RP-SMA type. The specifications must indicate that they are intended for 2.4 GHz Wifi (and the gain 3 dBi or better) 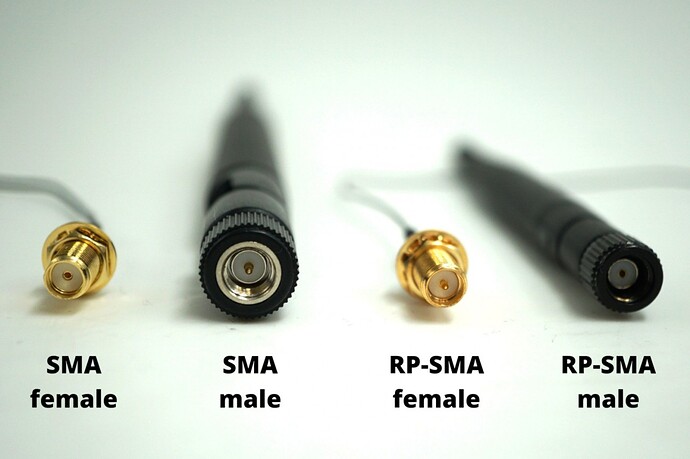 All clear now, Arylic is RP-SMA.

One more question.
In the table you shared in this topic, there is an item that says " Reflection Loss" with parameter value " -10dB’ .

Is reflection loss the same as " Gain"?

Hello,
They are different descriptive parameters of the antenna.

Antenna parameter interpretation is something for engineers with measurement equipment (e.g. reflection loss). End users usually focus on the easiest parameter “gain” but forget that not always “the higher the better” is desirable because then the directivity increases.

A rod antenna is a passive element. Suppose the transmitter has a power output of 1 watt. A rod antenna cannot add power but can bundle it more strongly to cover a longer distance, provided better targeting.
WiFi antennas all have an impedance of 50 Ohms with the very thin coax cables (as opposed to the 60 Ohm coax cabling for home installations)

The conversion table shows the impact of antenna return loss on the wireless system design. Of particularily interest are reflected power and mismatch loss.

What Is Antenna Gain | NetXL

Find out more about antenna gain and the optimum antenna positioning for the best signals and connections.

Hallo,
The very thin coax type RG-174U with the connectors I-PEX are intended for connection inside the chassis of a device and are max. 50 cm long. For antennas placed at a distance from a device, usually a coax extension cable type RG-174 (50 Ohm) with SMA connectors will be used that are commercially available, even up to 10 m in length. Keep watching the male/female connector combinations to stay compatible but everything is easily available in The Netherlands e.g. from

Thanks for helping with your suggestions, also for suppliers like AlleKabels.

My antenna has to cover 1 meter distance, for the full 1 meter inside a speaker casing. The I-PEX u.FL connector is the starting point, as it connects to me electronics PCB. The RG-174 cable is perfect, as I have at several points very narrow spaces to lead the wire through. This is also the case for leading the wire to the outside. So I prefer a RP-SMA to I-PEX u.FL cable of 1 meter.

I haven’t seen such at AlleKabels. If you know any other supply you can recommend, I would appreciate!

Dag KolfMAKER,
Using a long cable between transmitter and antenna is actually not a good idea because the cable attenuates the signal, especially with thin coax (which is why it is usually very short inside the chassis). High quality coaxial cables are thick and stiff to keep the attenuation as low as possible.

A good Youtube tutorial on antenna basics for consumer electronics can be found here:

A pre-assembled RP-SMA to U.fl thin coax cable of 100 cm length is unusual for consumer electronics (a chassis with a length of 1 meter? )(RG74U cabling can be found frequently in aerospace and military applications but orders by individuals seem impossible to me). Still, you can order the cable you are looking for in China (Banggood) or Israel (Alexnld.com /UK warehouse) if you are willing to take the risk and pay with Paypal but they are not cheap (pay attention to import costs). A few examples : 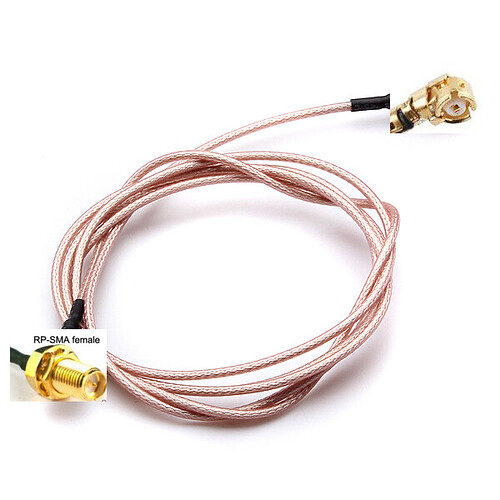 Is there a trick to disconnecting the cable from the PCB? I have broken a few of these connections.

Check. You have to be very careful indeed!
These connectors are tiny and damage easily when handled wrongfully or with too much force.

I recommend to use pliers with bowed ends. Put the ends on both sides of the antenne connector, just below the edge on the top of the connector.

Make sure you put equal pressure on both sides and make very small wiggle movements, left to right. It may take you some more time, but its the best way to disconnect without damage.

@spice
Hallo
It takes a little practice and dexterity not to destroy these connectors during manipulations. Replacing them by soldering on a PCB can be done with either very good eyes or much better with a stereo microscope and a very pointed soldering tip.
Just watch a youtube instruction like this :

Great video, especially the advise for disconnecting the antenna connector from the PCB. Again the golden rule, it should be possible to disconnect without tools or too much force.