Very recently it seems the 4Stream App has had an update. One thing I noticed it from is that the little ‘plus’ for re-/un-/grouping speakers, changed into a paper clip symbol. And the bottom of the screen has an added button for ‘Search’.

If possible, can you respond to the 2 questions (above)?

Hello! Regarding the wifi signal problem.
My Up2Stream 2.1 amp had issues when connecting to my PC via bluetooth. It was connecting but instead of outputting sound or something, the output was a strange buzzy noise that was so loud it could be heard from outside the house.
When I checked the connections between the antennas (of wifi and bluetooth) I noticed that the wi-fi had an external antenna attached to its specific port and the bluetooth was using the integrated antenna. I switched between these two and now it connects better to the PC. There are still a few times when I get issues while connecting but not so many as before. I think it is due to the antenna being poorly made.
Back on-topic. To solve that wi-fi signal and bluetooth signal problem, you could go and buy two external antennas with the required connectors and connect them to your board. (Or replace the current used ones with better ones) and that should solve it.

Hi Ernst,
Yes we do appear to have had a version upgrade, this is what the App Store says:

I only have one Arylic device on WiFi and you are correct, the app is showing the warning of a lower than normal signal strength reading which by the way doesn’t appear to be affecting its operation.
I cannot think of any other reason than a glitch in the software?
Not sure what a A97 model is?
Steve

Thanks for your comments Steve, that’s helpful!

I have all my Arylic devices on WiFi (not using Bluetooth). Most of them are Mini’s and S10. I also have this issue reported from other people for whom I built wireless speaker systems.

A97 refers to the Linkplay chipset used in the Arylic products.
The Up2Stream Mini and Pro v3 for instance use the Linkplay A31. The picture below shows an example of the Pro v3, but is the same for the Mini.
The A97 might be in the Up2Stream HD DAC, because one of its features of the A97 is AirPlay2. 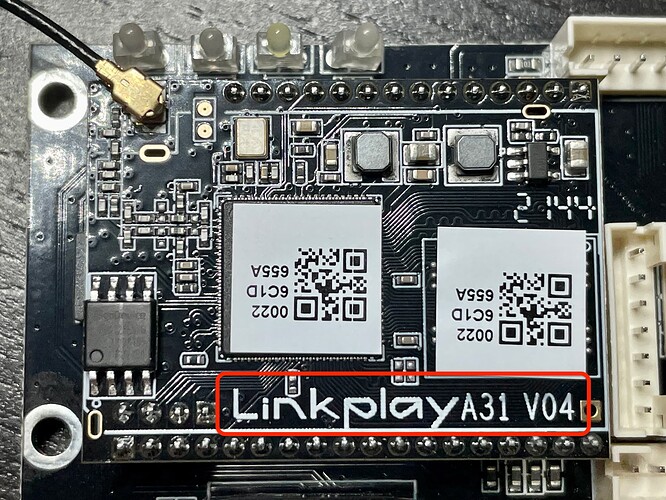 Thanks mate, that makes sense.

I guess you are right, that it makes sense to report this is a possible bug.
I was just checking the forum, if there is such section for bug reporting, but couldn’t find one. Do you know if there is?

Hi Ernst,
It appears that the app copyright belongs to Rakoit Technology (SZ) Co., Ltd. which I believe is the owner of the Arylic brand so maybe a message to Arylic is a good place to start?
Search Rakoit Technology.

@zpl1025 Frank,
Please read the thread from the top. Any ideas why the updated 4STREAM app shows a “speakers wifi strength is weak” warning message when previously the strength was more than adequate?
Thanks,
Steve

In the meantime, I can only recommend using the WiiM Home app. It doesn’t cause any problems and as a nice side effect it allows me to select Tidal HiFi. S50 Pro+/S10

Thnx @Hulle for your suggestion.

I also use the WiiM, but especially for it’s feature “Sync Audio” to sync all speakers in one group.

I am not sure yet if the WiiM and 4Stream App both show a notification when WiFi strength is an issue. When it happens again, I would like to compare both Apps.

Hi KolfMaker,
…the WiiM-app will show you the WiFi-strenght for the selected device, I’ve never received any messages. 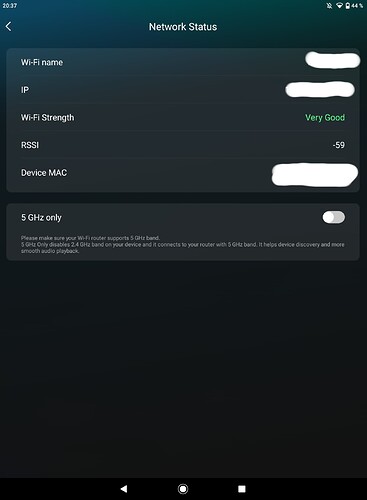 I have done a test, to compare the 4Stream App to the WiiM App. I unplugged my WiFi Extender to decrease WiFi signal strength. Here’s what happened:

So they both show the same notifications.

In fact, this is not a surprise. Both Apps are based on the same software. Just some differences in looks and functionalities.

So in this (test) case, it made sense that the App shows a decrease in Wi-Fi strength.
But the case for which I started this thread is a different one. Because there nothing changed, only the update of the 4Stream App. So I am still wondering if there is a glitch in de software App.

…hmm, strange. Maybe it could help to install a WiFi-Anylyzer App to check if the reception is really bad, e.g.: WiFi Analyzer (open-source) – (https://play.google.com/store/apps/details?id=com.vrem.wifianalyzer&hl=de&gl=US)

As written, I have not received these messages so far. I use a mesh network with multiple routers (someones as repeater configured).

The WIFI signal strength is read from device, on old APP, user have to open the information page to read it. And the new APP would notice user when found signal is weak. I think this is an improvement and not an issue actually.

Yes, you are right. I also think this is a good way to be notified when the WiFi signal is weak. It is definitely an improvement.

Question
What is the threshold / WiFi signal strength when the App will notify for weak signal? >50% for instance?

My original question when starting this thread, was not about if it makes sense to get a notification when the WiFi signal strength is low. As said, as a function this is fine.
I only noticed that in my configuration (4 speakers in one room), signal strength of all speakers always have been between 85% and 100%.
But one of the speakers dropped to 30% after the 4Stream App was updated. Which I found strange.

I also don’t know the threshold of the weak signal, as you know, the APP is inherited from Linkplay, we don’t have the souce code, and also has no willing to know such details…
And the issue might be interference of WIFI channels, the device should find a suitable channel itself after some time. But when some other devices (like phone or pad etc) come in and out, it might affect the connection and cause signal weak.

Perhaps unrelated to your situation but my S30 works miserably in the kitchen when the microwave is on.

My evolved understandig is that the 4Stream App just looks at the measured WiFi signal strength, compares it to a certain treshold, and when below that treshold it shows a notification box.

So for me, it is no longer a bug or potential bug. It is a flaw / sudden change of WiFi coverage in one area of my setup.