Searching for: Volume control button that connects with Arylic Up2Stream

@NWT.Stuff
That looks really good Kevin. It seems the response time to the press is also good.

I would say we have completed Prototype V0 - Proof of Concept. See Report below:- 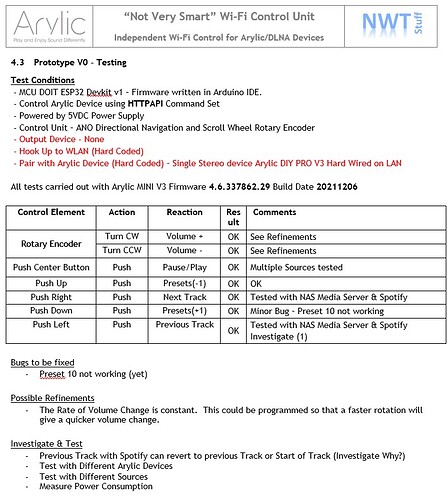 P.S. I do have a “Adafruit NeoPixel Ring - 5050 RGB” if you would like me to give that a go. Otherwise I have single colour and RGB LEDs available.

I would suggest a small web server running in web browser (responsive so that OK on Phone, Tablet & PC). I have never developed apps and I don’t really want to get involved in that sort of stuff. Is the Web Server idea OK for Prototype V1 ?

In the meantime I will continue with more testing, refinements and debugging.

Looking forward to your input, Kevin

@KolfMAKER It will be easy to throw a Stereo Pair in there and test this. I don’t have 2 x MINIs though so it will another Arylic Product for testing

P.P.S. I am thinking Prototype V2 Should be

Software Improvements, Refinements can be tested and implemented in the transition from Devices connected to terminals to a packaged prototype product. Let’s say the Transition From V1 >> V2.

@NWT.Stuff
Great work Kevin, and congrats with a successful v0!

You also mentioned a bug ‘preset 10 not working’. What kind of preset is this?

Which output device?
I think we discussed at an earlier stage to keep the ‘end product’ a clean product, with only one or two LED’s (power/battery status and wireless connection status). So my idea would be to still go that way. E.g. an Arylic Mini would do.
What do you think?

Web server
Totally fine with me.

@KolfMAKER Thanks for the feedback.

Yes I will crack on with simple LED’s

These are 10 SOURCE PRESETS on the 4STREAM APP - number 1 to 10. I just need to manage a 1 or 2 digit string. 1-9 work fine. 10 is not currently working. It should be straightforward

While I don’t have the jog wheel available on hand, I decided to start writing some code anyway while I wait for mine to arrive!

Using some parts laying around, I soldered up a beautiful button board for an ESP32, and wrote the ArylicHTTP library for interfacing an ESP32 with Arylic devices via the HTTP API.

Using the previously mentioned library, I build a small firmware package for the ESP32 which will grab button presses and interact with the API accordingly. I will need to make some modifications to work with the jog wheel once that arrives.

There are some improvements to be made for sure, currently the device supports only 5 functions:

The next two feature to work on are WiFi provisioning, and better volume control - Using the getPlayerStatus call I would like to fetch the existing volume and modify that vs setting an arbitrary level.

The firmware was designed to, on button press, wake and connect to WiFi; once the WiFi connection has been established, button presses will preform the above actions with minimal latency. After a period of inactivity, 15 seconds, the device will go into a low-power deep sleep mode to preserve battery power.

Some spare parts, an ESP32, and LiPos I had laying around, and now I’ve got myself v1 of an Arylic remote! 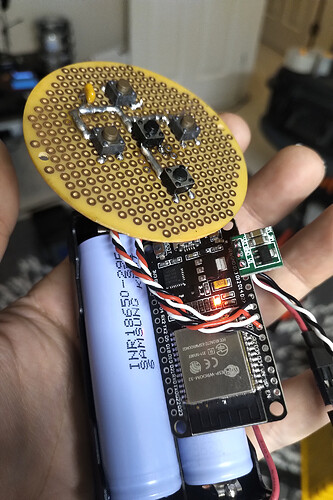 I am thinking a single RGB LED can accomplish all of these things, here is going to be the plan for my firmware:

I’ll update the functional specification and e mail it to you. I am quite happy to step aside on the coding side if you would like to contribute directly to this project.

I am using the Volume ++ & Volume-- Commands

@joy @zpl1025 @phranck I have noticed a couple of commands that are missing from the HTTPAPI. Volume ++ (Increases Volume by 7 steps (in the 0-100 Range) http://192.168.xxx.xxx/httpapi.asp?command=setPlayerCmd:Vol%2B%2Bn Volume – (Decreases Volume by 7 steps (in the 0-100 Range) http://192.168.xxx.xxx/httpapi.asp?command=setPlayerCmd:Vol--n Sorry this was my fault as I obviously didn’t check all the commands at the time. I am happy to correct and have another sweep through the documentati…

These commands are well suited to the Rotary Encoder Control

I have updated the HW Design Drawings & Prototype Hardware ready for testing next week. 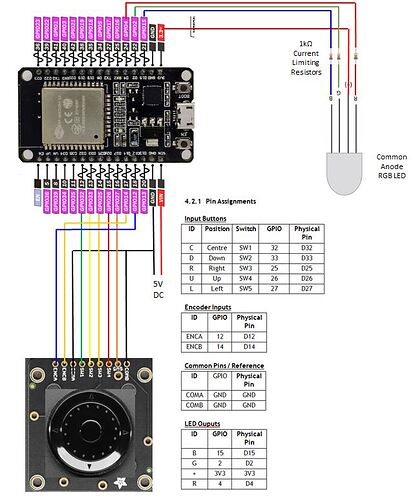 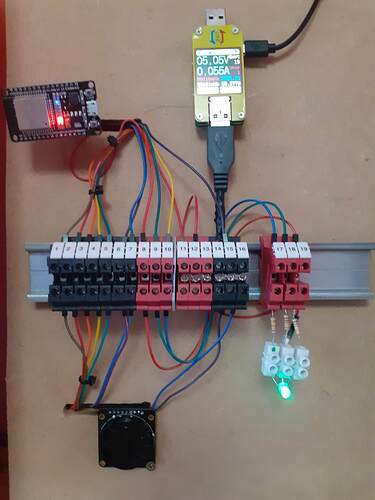 I’ve already added encoder support to my code, so if you decide to try out my firmware, be aware that we used different pin numbers! You will need to update the configuration in Pins.h first.

Here is what I have collected so far for a Requirements overview document. I also have project / task tracking setup on my OpenProject instance, and can grant logins to anyone who wishes. (below text exists as a wiki page)

The main processor the device is an ESP32-S2-WROOM, a device more then capable of preforming the task at hand. Chosen for it's low cost, WiFi capabilities, and Arduino integrations, this processor will allow a wide range of remote control tasks and even allows for OTA upgrades. This processor is so powerful in-fact, we will be under-clocking it to the lowest possible speed which still supports WiFi. Normally running at 240MHz (2x CPUs @ 120MHz), we under-clock our device to just 80MHz (1x CPU @ 80MHz) in order to save as much power as possible from the tiny LiPo pack attached.

Using the ESP32 as it's core, the device will communicate with Arylic devices via the HTTP API.

The device will be powered by a single small LiPo cell, and due to the low-power nature of the device, should last quite a while.

A simple device, the remote has just a simple jog wheel for volume control and 5 buttons which can preform a variety of actions.

A single RGB status LED will be used to indicate all modes and statuses of the device.

I’ve already added encoder support to my code, so if you decide to try out my firmware, be aware that we used different pin numbers! You will need to update the configuration in Pins.h first.

This is a very good point to emphasise. If using the drawings that I have posted attention needs to be be paid to the PIN Configuration. To be more precise

Great response and input @mclarkdev Matt. Thanks for thinking & doing with us!

Very interesting you mention to under-clock the ESP, resulting in low power consumption, but still being able to communicate via WiFi.; brilliant!

Status LED
Concerning the colors chosen, for the proto typing, any color is fine, as long is it distincts one functionality & meaning from the other.
In the final product I would prefer White for WiFi, like with the Arylic products (white = WiFi, blue = Bluetooth).

I have tried to consolidate @mclarkdev lamp colours with the possible faults we initially listed in the FDS. It looks like this:- 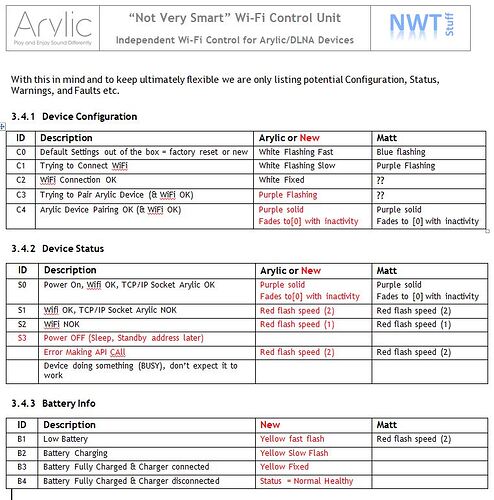 My main comments or propositions are:

Looking forward to your input, Kevin

With a view of moving forwards to the required hardware (BOM) for Prototype V1 & V2 there are a couple of decisions that need some thought/discussion.

However @mclarkdev do you think it will be possible to put it to sleep and wake up with a button touch ?

@mclarkdev do we need another input to the MCU or can we do this off the the microswitches on the ESP32 e.g. mount the board to make them accessible from outside the casing ?

Looking forward to your feedback, Kevin

No power on / off switch. One of the wonders of the ESP32 is it’s super low power consumption in a deep sleep, device can last for months.

The firmware is currently designed to enter a deep sleep after a 12 second period of inactivity (configurable). The device will then wake up at the press of a button.

I plan to use an additional input to achieve this. Once we go to a production device, we will not be using the whole dev-board, but instead just the ESP32 module itself.

Wow! Wow! Wow!
I haven’t read this thread for quite a while (since mid of November last year, I guess), and I’m now less or more out of active coding for personal reasons, but… THIS IS AWESOME! You guys are awesome! Really great work, and I really appreciate it…

I’m curious what the result will look like and how it will work. Brilliant.

I get the remark of @mclarkdev , especially the power consumption of the ESP. As long as the ESP is the only component taking power, and we do not have the need of a Mini on the volume knob, perfect.

Question from my side
So we use the ESP to connect to a Arylic device, or group of Arylic devices, and set commands to control it. Right?

So we use the ESP to connect to a Arylic device, or group of Arylic devices, and set commands to control it. Right?

Yes we do need to define how it will work re Master, Slave, Group. This will be purely software and functionality and shouldn’t effect the hardware design. @mclarkdev software is a lot more powerful than I had ever imagined and I am sure it will have much wider usage than our simple volume knob

I would like to familiarise myself and use Matt’s software before coming up with any firm suggestions. My next moves are:-

In the meantime I will also prepare something in the FDS that will help us work through the Multiroom side of things.

Yes we do need to define how it will work re Master, Slave, Group. This will be purely software and functionality and shouldn’t effect the hardware design.

Why I mentioned this is following. If in the end we need to control volume of a group of Arylic driven speakers, we might need an Up2Stream Mini in the volume know. If that’s the case, we get a different kind of power consumption for the knob.
If we can do just with the ESP, that’s fine. But I am curious how we than handle groups of speakers to be controlled by the knob (in a user friendly way).