Today i installed the Up2Stream Amp V4 and i got most of the audio sources (bluetooth, amazon music, internet radio,…) to work.

But i’ve also a NAS with a twonky dlna server in my network, but i can’t play any music from the NAS because i have no menu item “Home Music Share” in “My Music”.

I tested the twonky server with another dlna player (BubbleUPnP) and the server works fine.

Welcome to the forum, I can assure you that it is a friendly and supportive place.

I think your situation is a strange one

Q. I tested the twonky server with another dlna player (BubbleUPnP) and the server works fine.
A. The DLNA Sever seems to be broadcasting OK for me too

Is your Up2Stream Amp V4 on LAN Physical Cable or WLAN WiFi ?

So I would in the meantime :-

Everything still the same ?

Yes then
Download this tool from Play Store https://play.google.com/store/apps/details?id=com.tjjang.upnptool&hl=en_GB&gl=US and see what devices appear on your network.

Post a screenshot of the results of a LAN scan with this APP.

thank you very much for your fast response!

The Amp V4 is connected via WLAN WiFi. Does it make a difference for the Amp V4 how (cable or wifi) it’s connected the network?

I restarted the devices according to your instruction, but nothing changed. 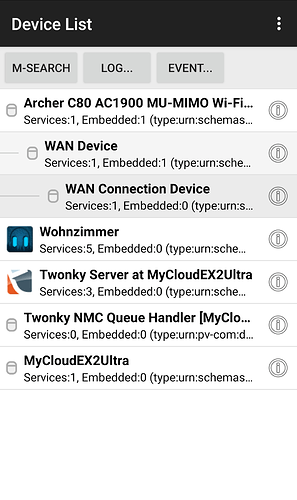 One approach could be to create another Music Server on the Network to check it is not alone a problem with the Twonky. This can be done easily with a Windows Computer, Even a Media Server App on an Android Phone.

i just tried it with another dlna server and it also doesn’t work.

so it doesn’t seem to be an issue with the NAS.

when does the hardware/app scan for dlna server?

I have run out of ideas without getting into detailed Ethernet Packet Sniffing. I am not sure how the process works myself so that would be time consuming.

Maybe try to uninstall and install the 4STREAM APP. What Version is installed ? Do you have a friend with an Android Phone ? Maybe try another phone.

If none of this works I guess it would point to something in the APP as the problem.

i would also rule out router/firewall/network problems, because other devices are working like a charme with the twonky or other dlna servers.

I think this will be the next step, i will sniff the network traffic with wireshark to see if i can see any upnp discovery packets.

I already tried with another Phone and there it also didn’t work. So i don’t think it’s an installation issue. You can see the app and AMPV4 firmware version in my first post.

If i will have any findings i will post it here, perhaps it can help somebody else in the future.

I will also try to contact the arylic support on another channel, perhaps they have a solution.

Thanks for your help! Kr Patrick

Wireshark would be my next move