This is my project I did, done while I was in college and on a budget. As such I had little tools and workspace but given the means I think it came out well. I hope to continue to expand and grow this project because it was a lot of fun. For starters this project uses a set of 8in Alesis full range speakers and two 4in tweeters (from the previous full range). I harvested these from old bookshelf speakers. The box I designed and built myself out of particle board. For the amp I used a car amp and then to be able to get media to stream I used a Up2Stream Pro V3 - Multiroom Wireless Receiver Board (No Amp) I then built it in such a way that it actually uses an ATV battery, providing at minimum 10 hours of use before needing a recharge. 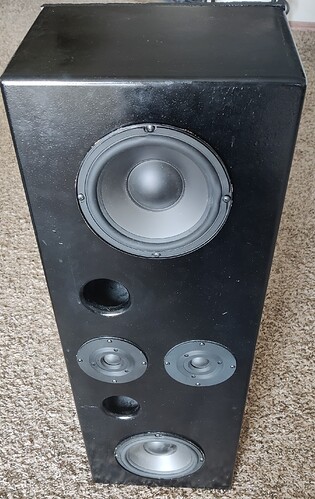 The idea I had behind this was to get it so the speaker was not just a speaker for in the house, but more importantly one that could be used on the go. I realize this is significantly larger than typical portable speakers, but eventually I will build smaller.

For the two full range drivers I ported using cardboard tubing, and then proved insulation in each speaker chamber. This came about after some trial and error and just playing around with what sounded better and reduced interference.

For the wiring like previously stated I used a car amp that allowed me to separate into left and right channel and also full range and high range. This amp was the second choice of amp I made because I had issues with several amp boards being overloaded due to wiring issues. The Arylic board I used I have done things with their products in the past and liked how I would get several input options: from Wi-Fi and Bluetooth to aux line in. In order to make this board work I used a voltage converter to reduce from standard ATV battery 12V to 5V. I encountered a number of problems from there, one of which was some feedback coming through the ground. I found a ground loop Isolator significantly reduced this problem to the point it is only noticeable at very high volumes.

On the box I did go for the black because I was hoping for a piano black finish, but due to time constraints and poor working areas, I did not get the high gloss mirror finish I was hoping for, but it still turned out okay. I have been using this build for over a year now and have had a blast. At first, I heavily used the Wi-Fi and Bluetooth features of the Arylic board, but now that I am in a more permanent space, I have linked this speaker via auxiliary cable with another arylic product to provide a more immersive sound in all points of the room. I use it with music, movies, and TV. Also since the original build with an ATV battery I have pulled it out and used a 12v power supply and have it constantly plugged in. That being said I left the wiring in place if I so desire to have the battery again, but I just found it annoying having it die after a week of home theater use middle of a movie. What do you think? What ideas do you have? 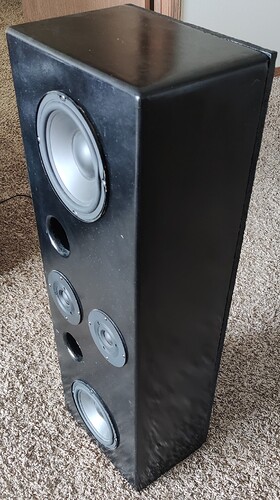 Nice Build !
For home theater, I think maybe you need to supply the power directly. Cause you are in the permanent space currently.

For me, I will use a battery on portable projects.

Sorry I guess I didn’t state or make it very clear that now that it is in a more permanent(ish) spot (aka home theater) that I bypassed the battery and battery charger and am supplying power directly from the wall outlet.

Wonderful project! From your post, I finally find a DIY Board and device that can connect via WiFi and Bluetooth. I will also have a try but maybe, I will make a more portable one with Arylic device. Thanks for your post that give an ideas to me!

It indeed a good job, integration the wifi streaming board , car amp and book shelf speaker. I do think if you have better working area and enough time, it will be amazing. Keep going

How many watts per channel does have? I ultimately might purchase such small dedicated wireless receiver for my system as I find it to bassy for my taste.

Thank you for your sharing.
It is awesome. You’ve given it new life! I would like to know how it sounds, is this one speaker?

like your wonderful DIY project. But I have a question about multiroom function. Is it possible to have two units Up2Stream Pro V3 - Multiroom Wireless Receiver Board and put them into two speakers , and set one unit as left channel and another as right channel ? Is this case, how can I make them play the same music at the same time ? Have you tried ? please let me know if you have any idea about my question. Thanks a lot in advance.

Excellent product, I’ve always wanted to connect my home stereo via WiFi. I found Arylic’s product through your article and was pleasantly surprised to find that I can also sync the speakers in my living room with the speakers in my bedroom. I am very happy with the excellent price and look forward to my experience after receiving the product.

Yes, it works as one speaker. Kind of like a boombox I suppose because it supplies stereo audio.

As for how it sounds l love it. I will admit I would adjust things a bit with future builds for a bit better sound quality, like adding speaker grills, but overall, it has great sound for the price.

Short answer is yes. Keep reading if you want the steps.

First once you have both your boards connected to the speakers and connected to your Wi-Fi network then it should appear in your app something like this:

InkedScreenshot 11080×2400 139 KB
The red circle is where you select to merge the two boards to play the same audio. (A few things to note: when this is done one board becomes the master and the other board(s) become the slaves. This can also be done with more than just 2 boards.)

Screenshot 21080×2400 115 KB
This is the next screen that appears. As one can see a list appears of the boards connected to the network and from there you can select which of the connect boards you want to link (by putting a check in the box).

InkedScreenshot 31080×2400 143 KB
After a brief moment to load the linking of the devices your screen should appear as above. Here you can control the group volume, individual speaker volume, and stereo/channel (circled in red). A side note: as seen here I can have two different speaker volumes within the group.

Screenshot 41080×2400 136 KB
As now seen above the “Compspeakers” are running left channel and the “Em Death Box” is running Right channel. Both play the same song at the same time but each one just has their unique channel.

Does that answer your question?

thanks bruh, it helps a lot.